Kaleemullah Khan is a Pakistani footballer who was born in Chaman, Pakistan on September 20th, 1992 and currently plays as a striker for Tulsa Roughnecks FC.

His international career began when he signed a five-month contract with a club in Kyrgyzstan named FC Dordoi. His performance was so exceptional that the club offered him a two-year contract worth Rs10 million. Khan was named Player of the Year soon after he finished as the highest scorer in the league and also won the Kyrgyz Cup and Super Cup.

All of these early accolades prompted immediate interest and there were invitations for trials from China and Iceland, although his agents had something else in mind. They arranged a one-month trial with USL side Sacramento Republic FC. The USL club put forth a condition; in order for Kaleem to complete the trial, he had to rescind his contract with Dordoi.

On the first day of his try-out, he twisted his ankle and was advised to rest for a week. Although thoughts of returning to Pakistan surfaced in his mind, Kaleem pushed through and continued showcasing his talents after being able to play again.

Khan's signing was the first time a Pakistani signed a contract with a professional soccer club in the United States. On June 20th, 2015, just after two days of his signing, he made his debut for Sacramento Republic as a substitute on the 66th minute of the game switching with captain Justin Braun. He later described the match as a "dream debut." 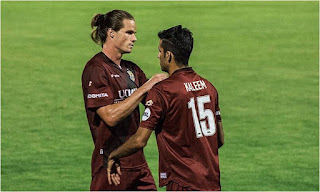 -
Kaleemullah coming on as a sub in his debut match in USA for Sacramento FC.

In Khan's native Pakistan, little significance is given to football. Nevertheless, young citizens of the country hold a blazing passion for the game. They are seen playing matches on the streets till late at night and many of them have called the game their "life" and "first love." Hence, the signing of the contract was a very big deal for his fellow country-men. The Pakistani nation was filled with joy and celebrated Kaleemullah’s contract as the achievement of the nation. The Pakistanis took to the internet to show their appreciation for the young footballer in great numbers. Kaleemullah Khan, who was not known by many before his contract with Sacramento Republic FC, now was being largely discussed in almost every corner of the country. He became the common topic for friends, colleagues and the media. The young man suddenly became a rising sensation, an inspiration and a heartthrob for many in the country. 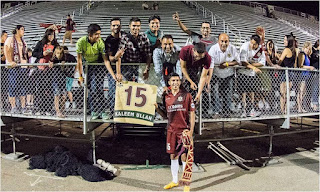 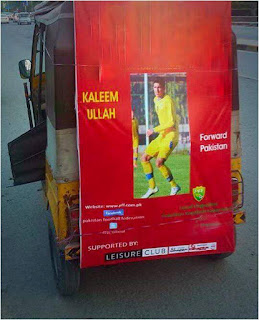 Kaleemullah’s poster at the back of a public transport vehicle in Pakistan.

By the end of the season, Khan appeared in just seven games for Sacramento. Prior to the 2016 USL season, Khan signed for another USL club, Tulsa Roughnecks FC.

The USL 2016 season started with a 1-0 win for Tulsa Roughnecks over Rio Grande Valley FC. It was also Kaleemullah Khan's debut match, and he was on the field for a full 90 minutes.

On Saturday, April 30th, 2016, the Pakistani footballer Kaleemullah Khan scored his first USL goal against San Antonio FC. The goal was assisted by Sammy Ochoa who passed the ball just in time for Kaleem to get past the opponent's goalkeeper Josh Ford and score in the second-half, on the 49th minute of the game leading his club to the first goal of the game against the rival's 3 goals.

I can speak for myself and my friends in saying that it's beyond amazing to see someone who comes from the same place as us making it big as a footballer.