Our tribute to one of the best of our time

Let’s be honest. The Landon Donovan article has been written. Many times over by more qualified people. No middle ground exists for Landon in the soccer expert world. It’s either the highest praise or the hindsight 20/20 point of view. Love him or hate him type deal. Personally, I love the guy for everything that he is and represents. When his name is mentioned in US Soccer lore it should be for all the things he did accomplish. Not the resume, the stats, or the titles. Just for the example of what he did and that it’s possible to produce world soccer talent in America. I know because I saw it with my own eyes.

He is The Blueprint for American soccer. The player he became is what he was going to be if he stayed in the major professional league in the United States or if he had been on a European squad for the last 10+ years. He was a super athlete who changed and grew with the times. He was egotistically confident, born of American arrogance. He was a blur down the wings who attacked and attacked and attacked some more. The essence of a true play maker is creating for yourself and those around you. Landon did both at an elite level on all stages of his professional career. He was the lead man during the evolution of the USMNT into world relevance.

In 20 years we will all look back and know what you meant to the sport and the nation. We will remember the 1999 U-17’s, the 2002 and 2010 World Cups and players will still be chasing your records. Thank you, Landon Donovan.
-Richard Bauer


August 7, 2014, is a sad day for the US soccer community as Landon Donovan has announced his retirement at the end of the MLS season. It feels like yesterday when a younger version of myself watched in awe as Landon Donovan scored that unforgettable winner against Algeria in the 2010 World Cup. Words cannot describe the impact that Landon Donovan has had on the beautiful game in the United States. He is a one-man champion of his craft. He has inspired a nation of millions and shown to the rest of the world that, yes, soccer has taken root in the United States and it is not only here to stay but it is developing as well. He gave us inspiration when we thought US soccer would never take off. He gave us belief that we can aspire to greatness. Landon Donovan gave his all to put US soccer on the map, and the groundwork he helped lay will give rise to something greater. Landon Donovan may be hanging up his cleats, but his memory will drive US soccer to new heights.

Thanks, Landon. You’ve made your country proud.

When I heard LA Galaxy was having a mysterious announcement, I got excited. I thought it meant the club was about to get a new singing. Maybe it would be the next Beckham. It did cross my mind the someone could be retiring. Robbie Keane, I thought. Maybe even Bruce Arena, but not Landon Donovan. I was shocked when I heard, well read on Twitter actually, the news.

Back when I was a little kid playing on my first soccer team, I had the number 10 Jersey. At the time, I didn't really care about the number. Years later, when I came across my old shirt, I was proud to have worn it. I remember thinking to myself: "I had the same number as Landon Donovan."

I think that says something. Out of all the 10's in the world, I was proud to wear the same number as Landon Donovan. I'll always be grateful to Landon Donovan. He was one of the first footballers I really liked. He was my favorite player on one of the first teams I really followed. He showed me what soccer is supposed to be. He showed me what real, professional sportsmanship is. So thank you, Mr. Donovan. Thank you for the years you've given to the game. I hope this season turns out to be your best yet.

This video says it all.
-Duncan Bochicchio 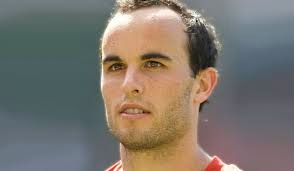